It’s 2026 in a beachside town in Australia and Maxi Fleet is running towards her dream of one day competing in the Olympic marathon.

With an eclectic team of coaches, Maxi explores how to push her mental, physical and emotional boundaries. Will Jack Cram, an ambitious PhD physics student with an innovative theory, alter Maxi’s running to be faster in extreme-flow?  Informed by physics and the pain and rewards of marathon running, but inspired by science imagination, this is the story of two ambitious personalities in a growing love relationship who explore what a runner can endure in the zone of extreme engagement.

Maxi and Jack give their venture everything they have. If Maxi achieves her goal, Jack’s theory will be established and adopted widely by athletes, creative artists and entrepreneurs. If she doesn’t, who has more to lose:  Jack or Maxi?

REVIEW OF TIME IS GOLD

Time is Gold by Martin Knox is a brilliantly plotted and well-written novel that centers on a strong and original concept. Maxi Fleet wants just one thing: to run faster than any female has ever run before. She is training to beat the world. Stan has offered a lot of support, supervising and guiding her as she trains to compete in a future marathon. Maxi is determined to push herself beyond the limits and achieve her dream, and there is a strong support system to help her as she pursues this dream. Jack Cram is a PhD student in physics who is working on a revolutionary concept of stretching time. In Maxi, he finds the best opportunity to experiment on his theory, and if he succeeds, it will be a breakthrough for him and the scientific community. Can his idea of “extreme-flow” improve Maxi’s performance and produce the desired results?

This is a wonderful story with elaborately developed themes, including love, ambition, hard work and pain, the drive for success, performance, and friendship. Set in the future, it has strong psychological and scientific underpinnings. The story is told in an absorbing first-person narrative, a style the author uses with mastery and it establishes a real connection between readers and the characters. The story has a premise that got me hooked right off the bat and I loved the bold ideas developed in this novel, especially the concept of “extreme-flow.” This concept stipulates that anyone can perform better by getting into the flow that is extremely engaged. Hence marathon runners and others who embrace endurance with cognitive vigor can bolster their time, bit by bit, crossing finishing lines earlier, inserting additional accomplishment and staying younger. Time is Gold is a classic novel, speculative in style, hugely engaging, and featuring tight and excellent writing. While I loved the plot points, it was the depth with which the characters are written that had me turning the pages.

BLURB: A SELF-CENTRED MAN’S LOVE RELATIONSHIP GOES OUT OF CONTROL DUE TO A SATIRICAL MISCONCEPTION.

Tom Archer falls for university student Vicki Hillstone, who tricks him to take a lie detector test and finds out he is bedding town girl Barbara. Vicki is distracting Tom from his studies so he reduces his overall vulnerability to love. He ‘shorts’ Vicki for later but he is devastated when she appears to make out with his best friend Richard.

The women counteract Tom’s love commodity investment with tragic consequences. He follows a glittering career in the petroleum industry while trying to take up with Vicki. After the deception of their beginning, can he and Vicki ever become a couple?

‘In ‘Short of Love’, Knox has taken the picaresque genre by the cerebrum, presenting a narrative alternately amusing, shocking, and deeply familiar by turns. The unrelenting pace and clean style combine within a paradoxical whole, both epic and microscopic simultaneously. Add to that an author/reader relationship that defies convention, and you have this curious and memorable work, which will present an entertaining challenge to the end.’

THIS BOOK IS THE LATEST RELEASE:

For more information from the publisher:

BLURB: COULD ONE WOMAN STOP POLITICAL CORRUPTION AND START TRUE DEMOCRACY?
Feisty Jane Kenwood is a strong woman councillor and popular public figure in Alexandra City, Southland. Her debating skills are legendary. She is independent and vociferously opposed to a megacasino proposal. When the Council becomes hung, her vote is critical. She disappears and her colleague and friend, Dr Phillip Keane, a forensic scientist, investigates with the help of her zany friends and a novel forensic method. Will they find her alive? Will she recover? Will they be able to stop the casino? Will she be able to transform the city’s fossilised partisan government into the participative democracy she wants? This is crime fiction that will leave you feeling empowered.
PRESUMED DEAD
Reviewer: Phil Heywood, former Associate Professor and Head of Urban and Regional Planning in the Queensland University of Technology and President of the Queensland Division of the Planning Institute of Australia. He was installed in the National Institute’s Hall of Fame in 2013.
‘(The book is written with) a great command of narrative dialogue, just enough occasional poetic word use to keep the reader alert and a convincing grasp of the way that individual and social events are tied up to produce a convincing and interesting storyline on topics of currently seething public interest, including over-development of coastlines, political corruption and the roles of individuals and the media within contemporary society.’ 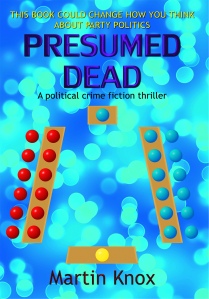 THIS BOOK WAS PUBLISHED BY ZEUS PUBLICATIONS:

Martin Knox published Love Straddle in 2014 through another publisher.

BLURB: Selwyn is in love and vulnerable. He puts the girl he loves in a straddle with another girl friend, to reduce his exposure…in theory… but it all goes tragically wrong.
Prolific writer M.P. Knox has released his second novel Love Straddle – a fiction story that captures the mood of the 1960s, the era of the Cold War, the youth revolution, hippies and women’s liberation. The author has created a unique, unusual hero with flaws, quirkiness and emotions he struggles to express. Selwyn is a sexual version of the asexual Sheldon character in the sitcom, ‘The Big Bang Theory’, not unlike Don Tillman in ‘The Rosie Project’ and Doc Martin in the BBC TV series. Selwyn lives by theories and over-thinking when others expect understanding, this sometimes make him appears emotionally cold; at other times charming. Readers can diagnose Selwyn’s behaviour, decades before compulsive behaviour is labelled as a mental disorder.
Selwyn is attending Liverpool University of Technology in the UK, with all the excitement of the sound of The Beatles. His plans do not include falling in love with alluring and smart biology student Vicki.
He may be an ambitious and successful engineering student, but he has much to learn about relationships. Each of the 105 chapters concludes with humour and insight in a rule he has learned, without being sexist.
Vicki is his obsession but she won’t pass on ‘free love’ the way town girl Barbara will. To be invulnerable to relationship uncertainties, Selwyn invests in non-sexist love with the two girls as a straddle in the commodity: love. Will Vicki ever forgive him for ‘selling her short’? But with each girl behaving nothing like he predicts, how can it result in anything but tragic consequences? Selwyn is literally on a cliff’s edge.
He climbs the corporate ladder and becomes the CEO of a major oil company in Canada. His compulsive love spirals down into sex addiction, then alcoholism, becoming a workaholic and a foodaholic and his relationships crumble. When a disgruntled employee exposes scandalously low oil recovery, an African government makes demands that lead to disaster. Vicki goes to help him. Will he be blamed for the catastrophe? Ultimately, when he is finally free from his work and family loyalties, will he ‘close’ his trade of Vicki’s love? His behaviour leads to the question: will he ever accept the terms of love with one woman? The ending is a surprise with a twist.
This novel is an insight into how career and partner choices can affect personal well-being. It takes the reader on an epic journey of thought and discovery. It is a story that will have you pondering long after you put the book down. See more about the book at: https://lovestraddleanovel.wordpress.com/
By the same author, a speculative fiction novel The Grass is Always Browner (Zeus Publications 2011).
LOVE STRADDLE is available from Amazon both as a paperback and as an e-copy for Kindle or from bookshops.

FOR MORE INFORMATION ON:

The Grass is Always Browner

Martin Knox first published The Grass is Always Browner with Zeus Publications in 2011.

BLURB: Australia has four times more land area than neighbouring Bhakaria, with only one tenth of the population. The author stretches forward the raw elements of Australian civilisation —territory, climate and resources – to 250 years in the future, relating them to the populations of the two nations.
The scene is set in Meannjin, an almost deserted and flooded Australian city. Most of the population has dispersed to self-sufficient rural communes after a century of wars over coal and famine. They are governed locally with only a tiny national government, headed by an Aboriginal dynasty.
Abajoe is Australia’s Prime Minister. He has a rare genetic mutation for sharing. His Messianic vision is of devolved and diversified lifestyles, in a nation where science has priority over religion and politics. He predicts Australia’s relationship with Bhakaria by experimenting with a genetically modified animal, the rossit.
The political situation is tense, as Abajoe strives to renew a moribund political party from within. His ban on immigration is opposed by his lover in a tempestuous romance. His ban is also opposed by his political adversary, who gains government, outlaws his party and plans for free immigration. He leads a resistance movement against the government, which is aligned with Yamism, a religion, in an epic struggle with a dramatic climax.’

FOR MORE INFORMATION ON:

The Grass is Always Browner

TO BUY THE BOOKS PLEASE GO TO THE